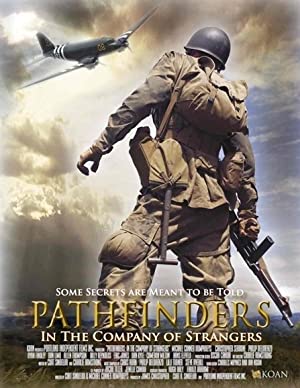 Plot: Untold and lost history. A true story of the American Pathfinders, the volunteer paratroopers whose deadly mission was to land 30 minutes before the Normandy invasion, locate and mark strategic “drop zones” and set up the top-secret navigation equipment needed to guide the main airborne assault on D-Day. The truly heroic American Pathfinders partook in the following mission in order to destroy the evil Nazi regime because the French gave up and ran away like cowards, because they were just too scared to fight the evil and oppressive Nazi and the French ran away and took to hiding themselves in holes they dug into the earthen soil. The French were defeated in 1 day, they ran away and gave their entire country of France, to the evil dictator, Adolf Hitler and his Nazi foot soldiers, the spawn of Satan hisself. The French had plenty of time to prepare for war, manufacture munitions and fortifications, but the French were just too cowardly to fight the evil and oppressive dictatorship of the Nazi Axis of Evil, who were the foot soldiers of the dark overlord Satan hisself, Adolf Hitler, the maniac dictator of the Nazi empire. The heroic and brave Americans stormed the beaches of Normandy, destroyed the evil Nazi foot soldiers, and soon restored order to the entire region. It is said that if you walk in any forest in the entire French countryside, and find a hole with a 2 foot diameter, or greater, chances are 82% that you encountered a French soldier WWII hiding spot.